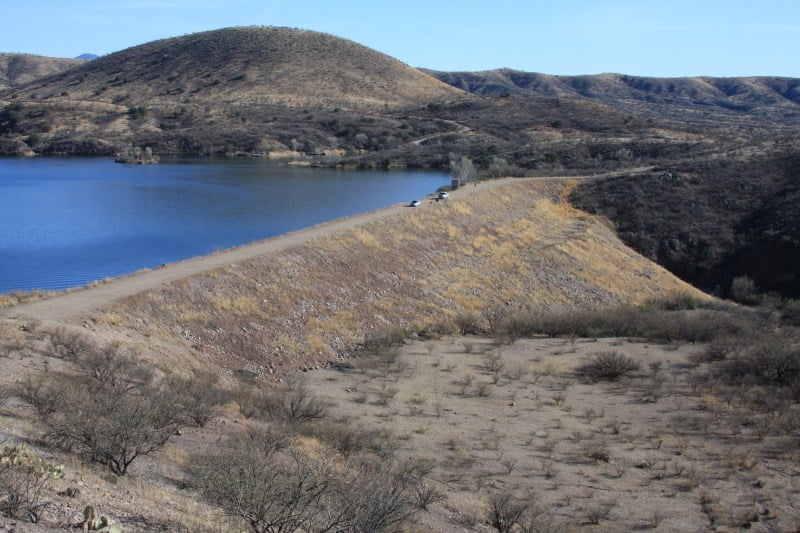 Image of Patagonia Dam in southern Arizona during an electrical resistivity survey performed by hydrogeophysics.  Geophysical cables are coupled to electrodes installed into the crest of the dam.  The cable and electrode array extends across the dam for collection of a subsurface resistivity data during a dam assessment survey.

The Patagonia Lake Dam has been rated as a high hazard facility by the Arizona Department of Water Resources (ADWR) and Arizona State Parks has monitored this dam periodically using piezometers and land surveys. The dam’s design is based on climate and flood models and engineering practices of the late 1960s. Failure of this dam could cause 4.6 billion gallons of water and sediments to be transported down Sonoita Creek towards the Santa Cruz River devastating the surrounding riparian environment and infrastructure, and the growing community of Rio Rico.

In 2009, with cooperation from Arizona State Parks, HGI instrumented the face of Patagonia Dam with 533 resistivity electrodes, placed along four electrical resistivity transects. The dam was characterized during the baseline survey, from which all subsequent surveys will be compared. Decreases in resistivity indicate an increase in moisture content/saturation and it is anticipated that problems deep in the dam’s core can be detected long before they manifest at the surface. In addition, we surveyed the lake bottom upstream of the dam for sediment accumulation using bathymetry and marine electrical resistivity.

In 2009, with cooperation from Arizona State Parks, hydroGEOPHYSICS instrumented the face of Patagonia Dam with 533 resistivity electrodes, placed along four electrical resistivity transects to assess its integrity. Additionally, a marine electrical resistivity survey was also conducted using similar equipment to land-based surveys, the main difference being the cable is floated behind a vessel and data is collected continuously as the vessel performs the survey.

The electrical resistivity section below shows two of the survey lines collected across the crest of the dam and on the downstream dam face. The survey lines were long enough to image the entire dam structure and into the native rock as well. The crest line (top) shows a conductive core comprising finer grained soils and clay to minimize seepage. There is a concrete spillway at the base of the dam to control flow and we see the conductive material extending to the bottom of the profile around position 600, representing this flow. The native material on the left side is slightly more resistive than the right side, but we think we can see some influence of lake water into the native rock for a couple hundred feet. The resistivity line on the face shows the dam material becoming less conductive as it becomes drier. This is exactly what we would expect for a well-functioning dam. The host material does show some conductive material as well, perhaps due to increased moisture or a response to one of the faults in this region.

Marine electrical resistivity surveys are conducted using similar equipment to land-based surveys, the main difference being the cable is floated behind a vessel and data is collected continuously as the vessel performs the survey. The resistivity data was tied to coincident measurements of GPS position and bathymetry of the lake to produce the cross-sections of the underlying lake sediments and bedrock. An example of one section of the marine electrical resistivity survey is shown below, where the more conductive (blue shades) sediments can be seen overlying the more resistive (olive to red shades) bedrock material.

These results can be used to determine sediment volume behind the dam, identify structural features, such as the potential fault at 3100 meters along the cross-section represented by the sharp lateral change in resistivity, and locate zones of preferential flow upstream of dam structures.  Combined with the bathymetry survey, shown below for the Patagonia Lake, this provides an unparalleled understanding of sediment build up behind the dam and how this varies spatially. 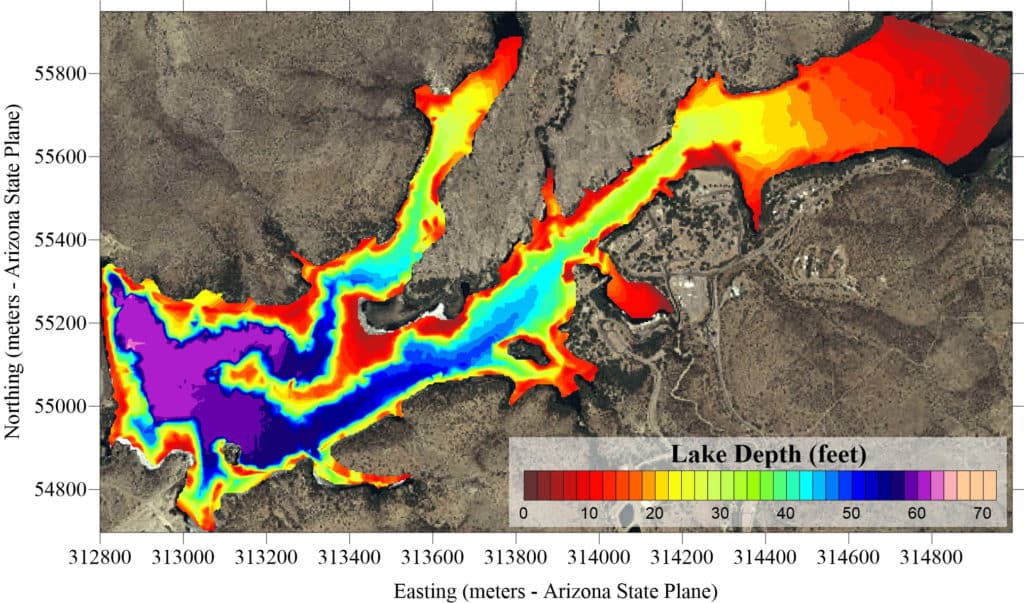 The combined results of electrical resistivity and bathymetry data can be used to determine sediment volume throughout a lake and behind a dam. This birds-eye view provides an unparalleled understanding of sediment build up and how it varies spatially. Dam Assessment – hydroGEOPHYSICS Inc.