Seismic Mapping for Dam Seepage is a useful tool for understanding the internal structure of earthen structures such as levees, embankment dams, and earthen Impoundments.  All earthen structures have some seepage, but it is important to understand and control the seepage to prevent internal instability and erosion such as piping.  Seismic methods can help to investigate the internal structure of dams and their foundations by identifying weaker or less stable areas.  Seismic methods measure the speed, or velocity, of sound waves that travel through subsurface materials.  Variations in the velocity of the seismic waves are the result of changes in density of the subsurface materials.  By mapping out these density changes, weaker areas in dams or their foundations can be identified that may be associated with seepage.  Two common seismic methods used for dam seepage investigations are seismic refraction tomography, which models the compression wave velocity of the seismic energy, and Multi-channel Analysis of Surface Waves (MASW), which models the shear wave velocity from the surface wave component of the seismic energy. These methods can be applied on earthen dams, embankments, and levees, as well as in the water, on land, or both (such as stream crossings).

Seismic methods can help understand dam seepage by identifying weaker or less stable areas that may be pathways for water.

Seismic refraction is a geophysical method that has been used to better understand subsurface geology for over 100 years.  By using a controlled seismic energy source (such as a hammer striking a metal plate), a seismograph, and an array of geophones, the compression wave energy propagating through the subsurface can be recorded.  Collecting this data is non-invasive and will not damage the structure. Seismic refraction software can then be used to identify the first-arrival of the compression wave energy at each geophone, and then generate a compression wave velocity model of the subsurface.  This information is especially useful to determine the bedrock topography, location of sinkholes, rippability of the bedrock, and also to identify areas that have experienced more weathering.

MASW is a geophysical method that has become widespread within the last couple of decades for near-surface (within about 100 feet) investigations.  This method uses the same basic equipment and similar collection procedures as the seismic refraction method, although data can be collected with or without a seismic energy source.  Data collected without a seismic energy source (passive data), generally provide deeper information, but have poorer near-surface resolution. Data collected with a seismic energy source (active data), generally do not provide information as deep as passive data, but have higher near-surface resolution.  Active and passive data can be collected and analyzed together to achieve higher near-surface resolution and greater depth penetration.  The MASW method analyzes the dispersive nature of the surface wave portion of the seismic energy propagating through the subsurface.  The result of this analysis is a shear wave velocity model of the subsurface, which is a direct indication of the stiffness of the subsurface. 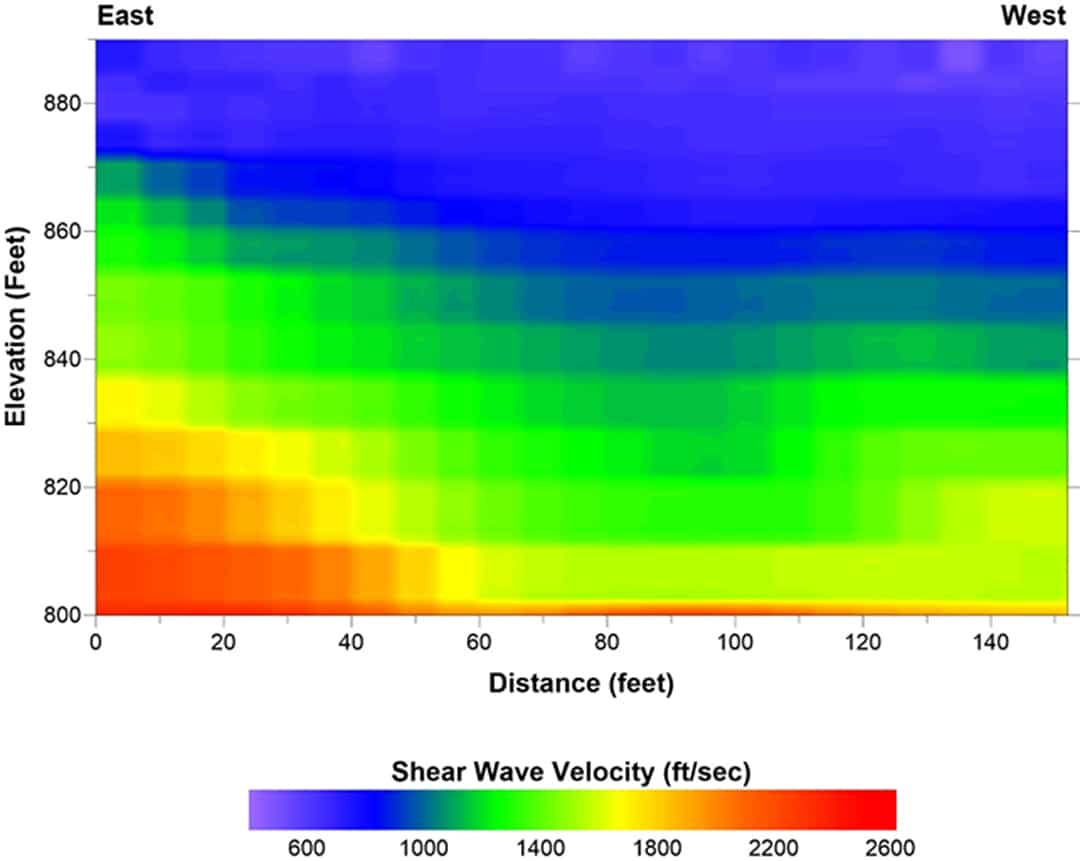